FRIGHT & AND SOON THE DARKNESS - on UK BD October

Two genre-defining British horrors from the 70s, both fully restored and on Blu-ray for the first time, FRIGHT and AND SOON THE DARKNESS will be released courtesy of Studiocanal’s Vintage Classics Collection on 14TH October 2019 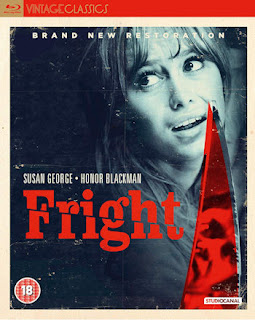 Young babysitter Amanda (Susan George) arrives at the Lloyd residence (Honor Blackman and George Cole) to spend the evening looking after their young son. Soon after the Lloyds leave, a series of frightening occurrences in the gloomy old house have Amanda's nerves on edge. The real terror begins, however, when the child's biological father appears after recently escaping from a nearby mental institution.

Pre-dating the release of Halloween by seven years, FRIGHT was the groundbreaker for the ‘terrorized babysitter’ variation of the ‘home invasion’ horror genre 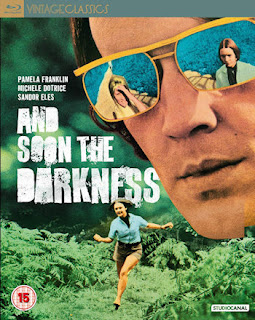 Directed by Robert Fuest (The Abominable Dr. Phebes, Wuthering Heights) AND SOON THE DARKNESS is a unique and suspenseful thriller starring Pamela Franklin (The Prime of Miss Jean Brodie) and Michelle Dotrice (The Blood on Satan’s Claw).

Two young English nurses, Jane (Pamela Franklin) and Cathy (Michele Dotrice) embark on a cycling holiday in the French countryside. They happen upon a mysterious man, Paul (Sandor Eles), who seems interested in them. Cathy is intrigued by the man, but suspicious Jane wants to continue on the journey. The two split up but when Jane returns to the village where they are staying, her friend is nowhere to be found. Frantic, she searches for Cathy, but who can she trust, and will she find her in time.

AND SOON THE DARKNESS cleverly confounds expectations and extracts the maximum amount of suspense, sustaining jeopardy and a sense of claustrophobia despite the story all taking place in wide open spaces in complete daylight.