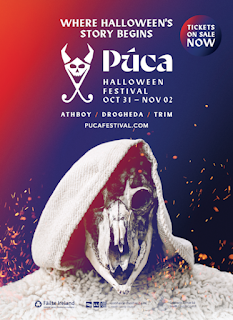 Ireland’s new three-day Halloween festival Púca is a spectacular, fun and otherworldly festival celebrating Ireland as the original birthplace of Halloween. Vibrant and contemporary in feel but strongly rooted in tradition, it will take place in three locations across County Meath and County Louth, from 31 October – 2 November 2019.

'Púca' is typically a shape-shifting creature from Celtic folklore and a familiar character in Ireland's narrative of Halloween. The festival has been developed by Fáilte Ireland (the National Tourism Development Authority of Ireland), in partnership with Meath and Louth County Councils, to claim ownership of this internationally celebrated event and to tell the story of Halloween’s origins in Irish and Celtic traditions with a view to encouraging more international visitors to visit Ireland during October and November.

Púca is produced by the award-winning festivals and events company, Curated Place.

In its inaugural year, Ireland’s Ancient East will play host to the newly established contemporary and inspiring Púca Festival which is designed to capture the original and authentic spirit of Samhain across three breath-taking nights of music, food, light and spectacle.

The walls of stunning and ancient Trim Castle and St. Laurence’s Gate in Drogheda will come alive after dark with some of the best projection and light artists in the world, including Seb Lee Delisle, Mark Anderson, Illuminos, and Ronan Devlin. Three festival hubs – Athboy, Drogheda and Trim –play host to Ireland’s best established and up and coming names in music including Lisa O’Neill, David Keenan, DJ KORMAC and Jerry Fish.

The Púca Food and Craft Market in Trim will offer tasty treats and traditional handicrafts to satisfy Halloween appetites. The Coming of Samhain at Athboy will kick start the festival on 31st October recreating the symbolic lighting of the Samhain fire

For the full list of festival events and to get tickets visit http://www.pucafestival.com