Arrow Video’s December releases are a truly chilling horror sequel and a classic crime trilogy from a South Korean master. The releases are as usual packed with extras, including beautifully designed booklets with new writing on the films and brand new sleeve artwork, ensuring these Christmas goodies will be on any avid film fan’s list for Santa.

The Exorcist III – On Blu-ray 9 December 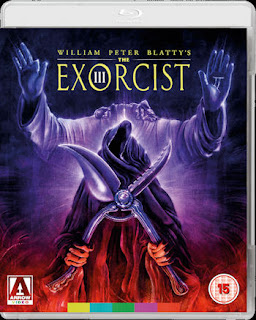 The true heir to William Peter Blatty and William Friedkin’s 1973 masterpiece, The Exorcist III is a hellish horror detective story that pairs thoughtful theological themes with scenes of sheer terror.

The personal vision of Blatty (the acclaimed author of The Exorcist), The Exorcist III is set 15 years after the events of the first film and sees Lieutenant Kinderman (George C. Scott, The Changeling) investigate a series of horrific murders that follow the modus operandi of the notorious Gemini Killer... who died several years earlier in the electric chair.

After his friend Father Dyer (Ed Flanders) is murdered in his hospital bed, Kinderman’s investigations lead him to ‘Patient X’, a psychopath housed at the same hospital who claims to be the Gemini Killer, and who knows intimate crime scene details. Their encounter leads to a fiery climactic confrontation between the eternal forces of good and evil...

The Exorcist III boasts some of modern horror’s most unforgettable scares and exceptional supporting performances from Jason Miller (The Ninth Configuration) and Brad Dourif (Dune). Blatty’s film is presented here in both its original theatrical cut and the recently assembled ‘Legion’ director’s cut.

DISC ONE – THE THEATRICAL CUT

The Vengeance Trilogy – On Blu-ray 9 December 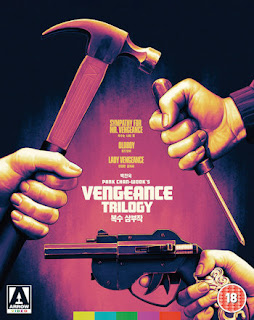 Sympathy for Mr Vengeance tells the harrowing tale of a young deaf-mute man, Ryu, who kidnaps a wealthy businessman’s daughter in an attempt to extort money to pay for his sister's kidney transplant.

A terrible accident sets the child’s father on a fateful path of revenge. Oldboy tells the grisly story of Oh Dae-su, a normal man inexplicably imprisoned in a grim hotel room-like cell for 15 years without knowing his captor or the reason for his incarceration. Eventually released, he searches for answers and retribution.

Lady Vengeance tells of Lee Geum-ja, a model prisoner serving a sentence for a murder she did not commit, who plots a dastardly revenge against the real murderer when she gets out.

Park Chan-wook’s visually stunning masterworks of revenge are presented in this new collection with a massive array of extras, including the feature-length Oldboy making-of documentary, Old Days.

DISC ONE - SYMPATHY FOR MR. VENGEANCE

These films will be available to pre-order shortly