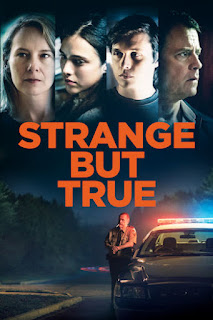 Margaret Qualley (Once Upon a Time… in Hollywood) stars alongside Nick Robinson (Jurrasic World), Greg Kinnear (TV's House of Cards) and Brian Cox (Manhunter, The Autopsy of Jane Doe), in the intense thriller STRANGE BUT TRUE, which comes to UK Digital outlets, September.

Laid up with a broken leg, Philip (Nick Robinson) is living with his mother Charlene (Amy Ryan - Escape Plan) in upstate New York. It’s been five years since the death of Philip’s brother Ronnie, a devastating blow that has torn the Chase family apart. When they receive a visit from Melissa (Margaret Qualley), Ronnie’s former girlfriend at the time of his death, wounds are re opened. Heavily pregnant, Melissa is under the belief that her unborn baby belongs to Ronnie.

Leaving Charlene angry and Philip incredulous, Melissa returns home to the cottage she rents from Gail (Blythe Danner - TV's WIll and Grace) and her husband Bill (Brian Cox), a former police officer who now owns the hardware store where Melissa works. When Philip suggests that Melissa’s revelation isn’t impossible, Charlene calls Richard, her ex-husband - and father to Philip and Ronnie – now living in Florida with his new wife. Could it be that Melissa is giving birth to Ronnie’s child? Stranger things have happened. But the truth is altogether more alarming…

Featuring a dysfunctional family dynamic, flourishes of dark Americana, a creeping sense of dread, and an audacious and unsettling shift in the final reels that leads to a mesmerising final sequence, Strange But True is a riveting mix of drama and thriller in the mould of 13 Reasons Why, Gone Girl and Prisoners.