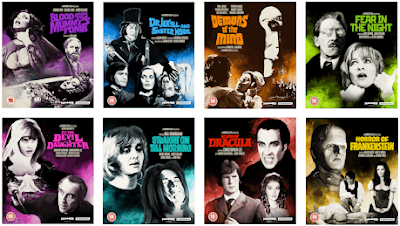 Frightfest restoration premieres of:
Demons of the Mind and Blood From The Mummy’s Tomb
27th August 2017

BLOOD FROM THE MUMMY’S TOMB, DEMONS OF THE MIND, FEAR IN THE NIGHT and SCARS OF DRACULA
Doubleplay editions released 23rd October 2017

DR JEKYLL AND SISTER HYDE, TO THE DEVIL A DAUGHTER, STRAIGHT ON TILL MORNING and HORROR OF FRANKENSTEIN
Doubleplay editions released 13th November 2017

In 1957, Hammer’s first ever horror film in colour was released: The Curse of Frankenstein. Its huge success spawned many more Hammer Horror films and the studio’s domination of the horror genre, which was to last for a decade and a half.

So 60 years on, to commemorate this anniversary, Studiocanal and Park Circus, in conjunction with FrightFest, Scalarama and more tbc, are releasing brand new restorations of eight classic Hammer Horror titles at cinemas and on DVD/Blu-ray doubleplay

From the gothic horrors Scars of Dracula, Blood From The Mummy’s Tomb, Dr Jekyll & Sister Hyde,Horror Of Frankenstein and psychological chillers Fear In The Night, Straight On Till Morning and Demons Of The Mind to Hammer’s last horror film of the 20th century To The Devil A Daughter, the eight films are selected from the glory years of the iconic house of horror.

On Sunday 27th August 2017, FrightFest will host the restoration premieres of Demons Of The Mind and Blood From The Mummy’s Tomb at the Prince Charles Cinema, London.

On 19th September 2017 Scalarama’s annual month-long celebration of movies presents ‘Hammer Day’, with screenings across the UK of all eight restored Hammer films, in conjunction with Park Circus. 19th September would have been the birthday of Hammer producer/screenwriter Anthony Hinds.

Studiocanal will release the newly restored films as Doubleplay editions on 23rd October 2017 [Blood From The Mommy’s Tomb, Demons Of The Mind, Fear In The Night, Scars of Dracula] and on 13th November 2017 [Dr. Jekyll and Sister Hyde, Straight On ‘Til Morning, To The Devil A Daughter, Horror Of Frankenstein]. Extra features are to be confirmed.