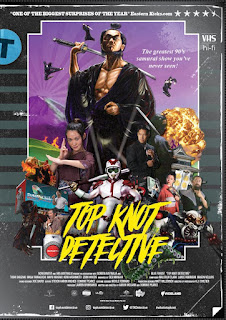 Top Knot Detective is about to make its English debut at the Prince Charles Cinema in London on the 28th of August 2017 as part of the 2017 Horror Channel Fright Fest.

In the early 90's, a little known Japanese Samurai/Detective series hit Australia where it quickly became a cult hit. In Japan it was called ‘Ronin Suiri Tentai’ (translation: ‘Deductive Reasoning Ronin’) but in Australia it was affectionately known as ‘Top Knot Detective’. A wild and crazy series about a wandering samurai doing battle with sexy ninja, giant robots and the occasional throbbing penis monster.

Created by Aaron McCann and Dominic Pearce as a throwback to the films and TV shows that were broadcast in the 90s, this “documentary” tells the story of director/star: Takashi Takamoto, who couldn’t act, can’t fight and most certainly can’t write a TV show. Luckily through various underworld connections, he had the means to turn himself into a superstar - but there was a price to pay for letting his ego run wild.