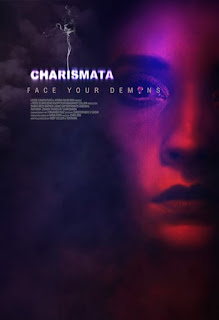 Andy Collier and Tor Mian’s supernatural shocker "Charismata" recently had its premiere and they were kind enough to send me a screener copy to look at prior to its submission to the festival circuit.

Set in and around London, the film centres around fledgling Police Detective Rebecca Faraway (Sarah Beck Mather, who you may recognise from her role as Nurse Dixon TVs “The Royal”) who it seems is having a tough time settling into the job and putting up with all the station banter and jibes that go with it.

When she and her partner, Detective Smith (Andonis Anthony – "Soldiers of the Damned", though "Hollyoaks" fans may recognise him from his role as Phil Sharp), are sent to investigate what appears to be a ritualistic murder. It marks the start of a series of grizzly discoveries in which people are being killed and various body parts removed as part of some sort of bizarre satanic ritual.


But this is no ordinary serial whack-job behind the killings, turns out that dark forces are at work and the perpetrator is attempting to summon up something decidedly evil that no amount of police training will ever prepare them for.

Best described as "Prime Suspect" meets "Hellraiser", with a bit of "Blood Feast" and "Seven" thrown into the mix, the film is both part Detective drama and part Supernatural thriller. The movie was surprisingly very good for what was obviously a low budget production, which benefitted from its use of regular working actors, who all put in solid performances.

The film is a bit of a slow burner though, as you’re never quite sure whether there is something supernatural at work, or if its just part Detective Faraway’s paranoia, as she struggles to cope with her new role, a bitter divorce and an addiction to prescription meds.

The film had its first press screening in London back in June and was well received and the film makers are currently in talks about a distribution deal. If you get chance to check this one out on festival circuit, do so!