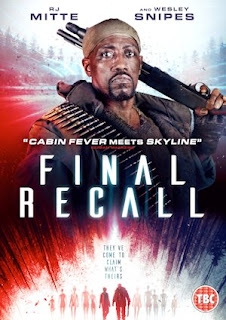 Independence Day meets Rambo (or should that be Blade?), as Wesley Snipes battles aliens deep in the woods in “Final Recall”, which is out now on UK Disc and Digital.

A group of teens are spending the weekend at a remote woodland cabin, when news reports start coming in of alien spacecraft descending on the earth and abducting people en mass.

The group subsequently find themselves being stalked by strange alien creatures in the woods. But with their car wrecked and no means of calling for help, escaping proves no easy task.

However, seems the aliens aren’t the only things out hunting. Enter Wesley Snipes as a deranged backwoodsman, who seems to know exactly what’s going on and has been busy preparing for this day, who quickly starts turning the tables on the alien foe.

But even if they survive the night, what awaits them in the morning when the military arrive?

Looking like it had a lot more money for what was obviously a mid-budget production FINAL RECALL boasts some impressive special effects and Wesley Snipes is awesome as ever as the semi-psychotic hunter.  For the most part the movie plays like a low budget “Predator”, though things seemed to slow down towards the end after some of group get abducted and the film changes gear showing their attempts to escape captivity.

If you enjoy low budget action films, you’ll probably want to check this out.

The screener I viewed did not contain any supplemental material, however the full release is said to contain the following extras...