On Saturday the 12th of November, the UK Festival of Zombie Culture took place in Leicester. Held at its traditional home, the Phoenix Arts Cinema, it’s now in it’s tenth year and proved to be as popular as ever. 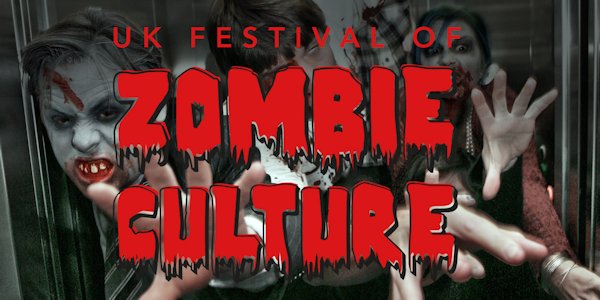 Boasting 13 hours of zombie film fun, the event also featured appearances from zombie authors Adam Millard, David Moody and Duncan Bradshaw, who were selling their wares and talking to fans and Zed Events were there plugging their zombie themed events and making people up. 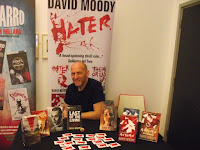 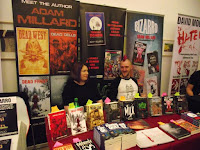 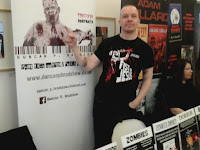 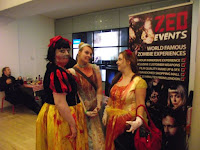 Filmwise, the fun kicked off at 12noon, with a selection of short films, ranging from the wacky “Unicycle Bastards”, about a group of heavily armed zombie hunters who ride around on Unicycles, to the bizarre French film “Le Queloune” (The Clown), in which a newly resurrected zombie clown finds he prefers cooking human flesh prior to eating, to the more serious “Velvet Road”, which deals with the subject of racial tensions in the 1960s Deep South during a zombie epidemic.

Then it was onto the first feature film of the day “The Night of Something Strange”, from writer director Jonathan Straiton. A film with so many shades of wrong it’s really difficult to know where to begin…

Rapey zombies, necrophillia, vile scenes involving blocked toilets, used tampons and used condoms. A case of "mistaken identity", where one lad doesn’t realise that it’s not his girlfriend that he’s climbed into bed with until its much too late (next time, try forplay). One unfortunate victim gets taken out after being sprayed by gallons of acidic semen from one zombie, whilst another is gassed by a toxic zombie fart (and that’s not the worst of it).

A film that proved to be as vile and disgusting as it was bloody hilarious, the audience certainly enjoyed it and I would recommend it, but whether you’ll enjoy it depends on your love of puerile humour.

Next up was Stuart Brennan’s “Plan Z”, which was a much needed change of pace from the previous film.

This low budget British zombie film sees the director playing the lead character, Craig. A man who’s always prepared for the worst (I’m sure we’ve all seen those “Doomsday Prepper” shows on the Discovery channel). So when a zombie outbreak occurs, he simply barricades himself in his flat and prepares to wait it out, by living off his supplies (a much better idea than heading for the Winchester).

But he is forced to alter his plans after having to leave his flat to try and rescue his friend Bill, who’s trapped in a nearby restaurant. Also, with the weeks passing and the zombie epidemic showing no signs of abating, they realise that waiting it out isn’t going to work and are going to have to find a new safe haven, if they wish to survive.

For what was obviously a very low budget film, I thought the director did a great job in depicting a zombie outbreak. OK, it’s no “Dawn of the Dead” to be sure, but was still a very tense and bleak British indie thriller, which shows you have to make some very tough decisions when it comes to surviving a doomsday scenario, and how even the best laid plans can very easily go awry. 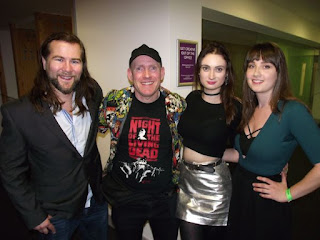 Director Stuart Brennan was in attendance to talk about the film, along with a couple of the films stars Victoria Morrison and Isabella Caley. Footage of which shall be appearing on my YouTube channel shortly.

This was followed by a screening of the critically acclaimed South Korean zombie film “Train to Busan”.

A businessman, going through a rather bitter divorce, is taking their daughter on the train to visit her mother, when reports of a zombie epidemic start coming in on the news.

Unfortunately, when one of the passengers on the train falls ill and goes on a rampage, infecting other people in the carriage, the remaining people on the train end up having to barricade themselves into the forward cars, whilst the driver tries to find a station where they can safely disembark. But with the zombie epidemic now spreading like wildfire through all the major towns and cities, this is going to be no easy task.

A brilliant action movie that was well received by the audience, which was only let down by some slushy, sentimental scenes towards the end. But aside form that, this was really gripping stuff.

It was back to the slapstick humour for the fourth film of the day, with Dominik Hartl’s “Attack of the Lederhosen Zombies”.

An alpine resort owner’s special chemical mix for producing artificial snow during the resorts warmer months has some unexpected consequences, turning the people on the slopes into zombies.

A group of snowboarders drinking in the nearby tavern, subsequently find themselves forced into a series of slapstick battles as the undead take over and they try to battle their way to safety. Will they become zombie fodder, or will the zombies love for German Oompah music be their salvation?

The title tells you pretty much everything you need to know about the film, which proved both gory and silly in equal measures and proved a sure fire hit with the festival crowd.

The final film of the day Sevé Schelenz's "Peelers", was a last minute change in the line up (replacing the originally announced “Re-Kill”)

This one concerns a group of people working at a remote strip club late one night, who have to fend off attacks from the undead, when the bar is over run by a group of infected Latino mine workers, who’ve been exposed to a contaminated batch of crude oil that’s bubbled out of the mine.

Gory, fun and action packed, this was, for the most part, a straight action/horror movie, but peppered with elements of black humour and was another festival crowd pleaser. However, I felt it was slightly let down by a number of plot holes and inconsistencies and a couple of downbeat scenes near the end, which seemed at odds with the rather comical mid-credits scene showing how the strip club got its name. But overall, was still a decent zombie flick!

And that concluded the festival for another year, and it was time for me to make the long journey home.

The UK Festival of Zombie Culture is organised by “Zombie” Ed Thurlow and takes place each year, mid November, at the Phoenix arts cinema Leicester. 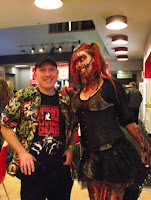