I AM NOT A SERIAL KILLER - New Quad poster & Trailer

Bulldog films have released the new quad poster and trailer for forthcoming I AM NOT A SERIAL KILLER, which comes to selected UK cinemas and VOD outlets this December. 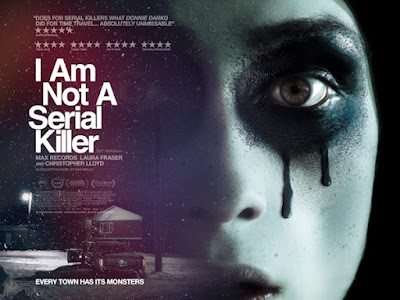 Featuring a star-making lead performance from 17-year-old Max Records, and an extraordinary turn from Back To The Future’s legendary Christopher Lloyd,

I AM NOT A SERIAL KILLER is the most sheerly entertaining and audaciously offbeat offering since Donnie Darko hit cinema screens.

A big hit when it premiered at the South By Southwest Film Festival in March, and was a must-see film at the prestigious BFI London Film Festival. It proves that left field indie cinema is alive and kicking, even if the Clayton County killer’s victims aren’t. “Hit the switch John...

Directed by Billy O’Brien (who made the award-winning Irish horror hit Isolation), although deliciously unclassifiable, is best described as a sensationally strange horror/sci-fi coming- of-age black comedy. Adapted from the first in a series of novels from bestselling author Dan Wells, the tremendously sharp script left-foots the audience at every moment, right up to the deliriously unexpected and thrilling finale.

I AM NOT A SERIAL KILLER, is released to selected UK cinemas and on VOD 9th Dec.