More than 30 years after starring in Troma Entertainment's cult classic horror-comedy The Toxic Avenger, Mark Torgl - AKA Melvin the "Mop Boy" - resurfaces at a fan convention, only to be abducted. And for what? A contaminant-rich toxic oasis a select few know exists.

Learn the almost-true story of Mark’s disappearance and unexpected return in the official movie trailer:

Toxic Tutu will have its world premiere at Mad Monster Party in South Carolina on March 25, 2017. The event will include celebrity guests and more. Seating is limited! 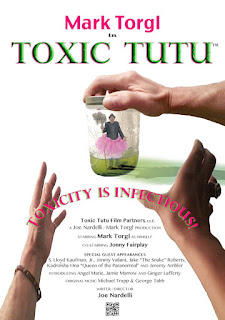 The Toxic Avenger has influenced countless independent filmmakers since its debut in 1984, but none more so than Joe Nardelli. With Toxic Tutu, Nardelli has created a companion piece to The Toxic Avenger with the help of hundreds of fans and the blessing of Lloyd Kaufman, who also appears in the film.

Nardelli explains, “Mark Torgl, my best friend, told me almost five years ago that Eben McGarr and Joe Mo from Mad Monster Party Charlotte had invited him to make a celebrity guest appearance at their convention to celebrate the then-upcoming 30th anniversary of The Toxic Avenger. What started out as a weekend home movie documenting Mark meeting his fans and learning how much Melvin meant to them turned into a four-year obsession and one of the greatest experiences in my life.”

Head to ToxicTutu.com for additional details about the film, including Toxic Leaks, bonus content not featured in the film, cast and crew information, and more. You can also follow Toxic Tutu on Facebook and Twitter.