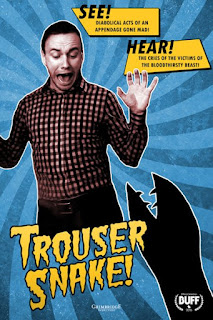 A night of necking at Lovers’ Lane gets the shaft when a monster rears its ugly head in this comedic send-up to 1950s creature features.

Trouser Snake is directed by Alex DiVincenzo, whose previous effort, The Horrors of AutoCorrect, is distributed by Eli Roth’s Crypt TV. DiVincenzo co-wrote the script with composer James Cilano.

"Last year, I somehow convinced some of the most talented cast and crew members to be in New England to help me make a movie about a one-eyed monster," muses DiVincenzo. "I loved seeing audiences react to it at film festivals, and now I'm excited to put it online for all to see."

Keep an eye on Grimbridge Productions on Facebook to be the first to know about future projects.