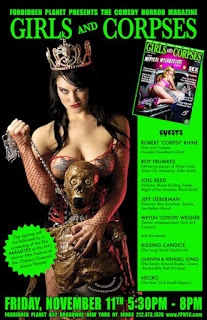 One for my US site visitors, particularly those from the New York City area. The people behind GIRLS and CORPSES MAGAZINE are doing a VERY signing at Forbidden Planet NYC, Broadway, New York, NY 10003 on Friday November 11th  5:30 pm to 8 pm 832