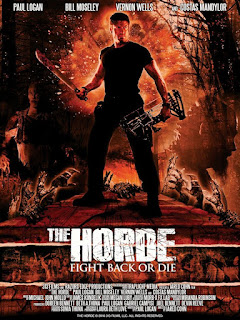 Rambo meets The Hills Have Eyes in Jared Cohn’s “The Horde”, which is out in the US and Canada on VOD this month.

A college lecturer (Tiffany Brouwer – TVs American Horror Story) is taking her photography students on a weekend field trip to do some nature photography, along with her ex-Navy Seal boyfriend John (Paul Logan – Mega Piranha).

Unfortunately for the happy backpackers, no sooner does darkness fall then the group are attacked by horribly disfigured, mutant, inbred hillbillies. Who it turns out are remnants of the old town, that used to work in the old uranium mines (or something?) and are being led by some escaped criminals (including Costas Mandylor -  Saw 4-6) who've taken to hiding in with them.

With many of the students killed or captured, it's up to John to save the day as he goes into full survival mode, setting traps and taking them out with his trusty longbow and various sharp implements.

Not to be confused with the French zombie film of the same name from 2008, "The Horde" is obviously a film that borrows its plot from countless others. Like, The Hills Have Eyes, Deliverance and most notably the Wrong Turn films and mixes in elements from various action films, in particular the Rambo movies. But still proves to be a very fun, action packed, horror/survival film, which features lashing of over-the-top gore and some outrageous fight scenes.

Horror veteran Bill Moseley (Texas Chainsaw Massacre 2, Devil's Rejects) turns up in a minor role as a redneck bartender, whilst Australian baddie Vernon Wells (Wez from Mad Max 2) also turns up as one of the mutant mountain men.

I actually really enjoyed this one, which proved to be a damnsite more entertaining than those terrible “Wrong Turn” sequels. So if you’re in the mood for watching a group of obnoxious, spoilt teens getting brutally butchered by mutant, backwoods mountain men, this one is recommended viewing!!!!

"The Horde" will be available on VOD outlets in the US and Canada from May 6th.