A post-apocalyptic dish of murder, meat and mysticism is served up in Alex Lightman’s brightly fused British debut feature TEAR ME APART, which is released online on June 17, following its UK theatrical premiere at The Genesis, Whitechapel, on June 16. 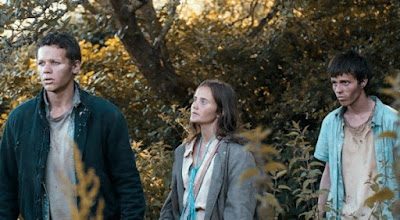 Living in a cave in a barren part of the Cornish landscape, two brothers turn to cannibalism to survive. Although the eldest (played by Frazer Alexander) clings to the notion that their father will reappear, bringing with him the return of the ‘old world’, the younger brother (Alfie Stewart) has no such moral compass and relishes the meat he can get from the bodies of nomadic wanderers who stray into his sights.

Then one day, a different kind of prey appears, in the form of a beautiful teenager (played by Jennie Eggleton). She is possibly the last girl alive and her powerful presence ignites a sexual maelstrom. A dangerous game is about to be played. Animalism versus humanity.  Love versus survival. Love. Kill. Eat.

Director Alex Lightman reveals: “When the idea of a post-apocalyptic world devoid of women emerged, we were adamant that the film should not explain what happened. It is essentially about three young people trying to figure out not just how to survive, but if survival is what matters most to them.”

TEAR ME APART is directed by Alex Lightman, written by Tom Kerevan and produced by Alex Lightman, Tom Kerevan & Ern Herrmann, It stars Alfie Stewart, Jennie Eggleton and Frazer Alexander. all making their lead feature film debuts. Receiving its World Premiere at Austin Film Festival 2016, the film is the first project from Cannibal Films, who are already in development with their second feature, a psychological thriller, which they intend to shoot  next year.

The film will be available to download exclusively from http://www.tearmeapartmovie.com