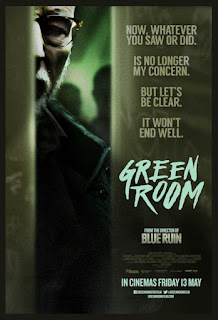 GREEN ROOM, director Jeremy Saulnier's (Blue Ruin) disturbing tale of Punks vs Skinheads comes to UK and Irish cinemas on Friday the 13th and I was lucky enough to see an advance screening.

Anton Yelchin (Star Trek, Terminator Salvation) is the guitarist for punk band The Aint Rights, whose tour of the US has been fraught with money problems. Having to syphon fuel from other vehicles just to get from gig to gig, they reluctantly accept an offer of playing at an offbeat roadhouse, frequented by right-wing neo-nazi skinheads, just so they can scrape enough money togethor to finish the tour.

Unfortunately, as they're getting ready to leave after the gig, one of them witnesses something backstage they shouldn't have done, and they end up having to barricade themselves in their dressing room, along with another witness (played by Imogen Poots - 28 Weeks Later), whilst the skinheads at the club are trying to figure out how best to silence them...

Patrick Stewart (Star Trek - Next Generation, X-Men) puts in an exceptionally chilling performance as the cold and calculating leader of the neo-nazi group (even though he was perhaps a little too "English" for a role one would normally assosiate with a Sourthern redneck) and the film features some quite disturbing scenes of gore and violence.

Definitely one of my favourite films of the year so far. I would strongly recommend going to see this one. 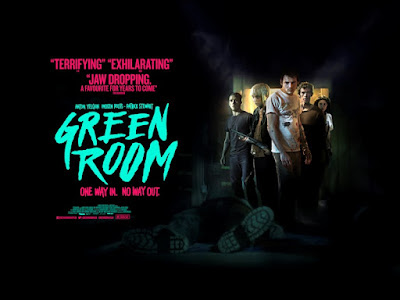