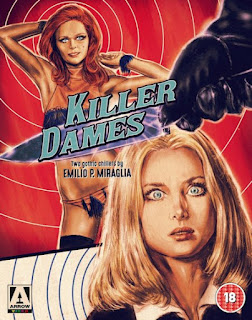 Director Emilio P. Miraglia may not be the most well known Italian director, but during the early 70s, he did produce 2 very popular cult titles. “The Night Evelyn Came Out of the Grave” and “The Red Queen Kills 7 Times”. Which Arrow films have packaged together, with a wealth of supplemental features, for their KILLER DAMES limited edition Blu-Ray and DVD box set, which is out this month.

The first film in the set stars Italian actor Anthony Steffen (Django the Bastard), as wealthy English Lord Alan Cunningham. Recently released from a psychiatric institute, he goes around luring redheads back to his country estate, before murdering them in his S&M Dungeon.

Seems he has a thing for women that remind him of his ex-wife Evelyn, of which he had something of an acrimonious relationship with. But when he meets the lovely Gladys (Marina Malfatti) at a party, he's immediately smitten and marries her straight away.

This initially seems to have a calming effect on him. But it isn't too long before they both start experiencing strange visions of his late wife and his urge to kill starts to rise once more.

Will his doctor re-commit him before he kills again, or is there something a bit more sinister behind these visions that are causing him to crack up again?

Set in England, though (obviously) filmed in Italy. The plot is rather intricate with tons of red herrings, including a séance with a psychic medium, a groundskeeper who happens to be his ex-wifes brother, who's also having a secret relationship with Alan’s aunt. And there's a brother who may, or may not, be after Alan’s fortune.

Not overly gory, the film was almost like an Italian take on an Agatha Christie story and remained relatively compelling throughout. Though it is a bit of a slowie and as such is really one I would only recommend to lovers of Italian Giallos.

Extras on the disc include…

Another Evelyn comes back from the grave in the second film in the set. This follow up of sorts concerns a group of sisters, Kitty (Barbara Bouchet – Don’t Torture a Duckling) and Evelyn, who are twins. Plus a third sister, Franziska (Marina Malfatti), who’s not introduced until later.

Growing up in their Grandfather’s castle, Evelyn makes the life of her twin Kitty miserable. Until one day, when the girls are in their teens and Kitty accidentally kills her during a fight, which the family attempts to cover up.

A few years later, their grandfather is killed under mysterious circumstances, which is followed by a string of murders of people connected to the family. All committed by a perpetrator baring a striking resemblance to the late Evelyn.

Tales of a family curse persist, in which every hundred years the family produces Twin sisters, one of which dies, only to come back and kill 7 victims, one of which being her sibling. But is it the curse, or just someone trying to get their hands on the family fortunes now the Grandfather has died?

Sharper eyed viewers will recognise Mariana Malfatti from the directors previous film, along with cult B-movie actress Sybil Danning (Battle Beyond the Stars) who also has a supporting role, along with Marino Mase (Contamination) who turns up as a police detective with a decidedly dodgy moustache.

As with the director’s previous film, there are plenty of twists and turns and red herrings, so you really need to pay attention to what’s going on. But the film is an interesting gothic horror which fans of Italian Giallos will love.

Extras on the disc include.

Optional English or Italian audio with English subs, which is viewable with either the Italian or English credits.
Audio commentary with critics Alan Jones and Kim Newman
Optional introduction by production designer Lorenzo Baraldi
The Red Reign feature (13mins) – critic Stephen Thrower discusses the making of the film
Life of Lulu (20mins) – actress Sybil Danning discusses her role in the film and her career in horror.
Alternate opening – Alternate pre-credits sequence used for some foreign releases of the film.
Dead  a Porter feature (13 mins) - 2005 interview with production designer Lorenzo Baraldi, originally filmed for the US DVD from No Shame (Italian with English subs).
Round up the Usual Suspects feature (18mins) – 2005 interview with Italian actor Marino Mase (Italian with English subs).
If I met Emilio Miraglia today (4mins) – brief feature in which Marino Mase, Erika Blanc and Lorenzo Baraldi share their thoughts about the director (made up of out takes from other interviews on the discs)
My Favourite Films (1min) a VERY brief interview with Barbara Bouchet filmed at New Yorks Chiller fest in 2005.
Lastly there’s the Italian and English theatrical trailers and the sleeve has reversible artwork, featuring the original and a newly commissioned design by Gilles Vranckx

Both films boast new 2K HD scans from the original camera negatives and come with both Blu-Ray and DVD versions of the films and a 60-page booklet containing new writing by James Blackford, Kat Ellinger, Leonard Jacobs and Rachael Nisbet.

This box set is strictly limited to 3000 copies and is out now from Arrow films. So grab it whilst you can!