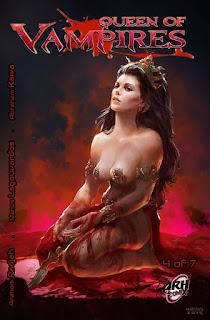 ARH Studios is announcing the 4th issue of their talked-about hit-series QUEEN OF VAMPIRES.

Arahom Radjah is proud of the achievements so far and tells this about the issue at hand: "The point I would like to stress most for this issue would be the FALL OF ARKHALLA. This issue is all about the moment she realizes her feelings for SHAMATH which is also the same moment she finds herself betrayed by everyone, including SHAMATH himself.  This is for me the most interesting aspect of this chapter, how things can change so suddenly and so much from one moment to another.

This is something I’m bringing from my own personal life experiences into the stories I’m writing. You will see the same also happening in the ASTRIA comics. Your entire life can change in a split of a second, and you can’t even foresee it coming.

The other important thing is how SHAMATH became Arkhalla's savior. If we look back at the first pages of issue #1, we see ARKHALLA sparing his life without even realizing that he would save her life so many times and in so many ways.

In issue #5 (not spoiling it!) the readers will see ARKHALLA telling SHAMATH that he has saved her in many ways. This is the realization of all the wrongs she has done her whole existence and of what she actually became as a Vampire Queen. We infused a lot of depth in this story, and as I said before, the last three chapters are extremely touching and emotional.  I can’t read chapter #5 without having tears in my eyes, and the ending of the 7-issue miniseries, is in my opinion, one of the most romantic and beautiful endings I have ever seen. A truly Hollywood worthy masterpiece!"