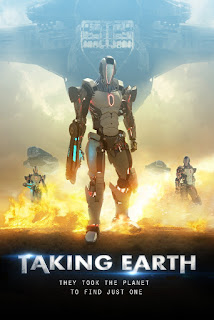 An unexplainable event that has thrust the world into chaos brings two survivors together as a portion of the world’s population presumably infected by a strange outbreak, hunt them. These Infected Ones (IO’s) seem motivated by an obsession to rein chaos with a need for tasting blood. The two survivors; David (Ronan Quarmby) and a teenager named Cameron (Marco Torlage) form a bond as they try to find their lost loved ones, but the young man has a secret about the outbreak – all is not as it seems.

A race from another world are orchestrating this attack on Earth as they hide in the skies, searching for the one out of seven billion people… searching for Cameron. Controlling the IO’s who are gripped in a bicameral state, time is running out as the ‘Visitors’ patience is waning and a greater threat faces our world if the boy is not found. David must help Cameron find his mom, Ellen (Barbara Harrison) and do what they can to stop the alien attack.