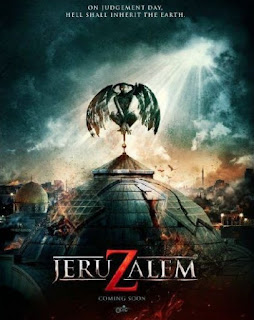 Israeli horror film “JeruZalem” had it’s UK debut at Frightfest earlier this year and is also being screened at the Jewish Film Festival in London this month, and I was subsequently asked to take a peek at it.

American Teenagers Sarah (Danielle Jadelyn) and Rachel (Yael Grobglas) are going on a backpacking holiday around the middle east. But following a chance encounter on the plane with a cute American lad named Kevin (Yon Tumarkin), they decide to start their tour in the Israeli holy city of Jeruslam for the Yom Kippur weekend.

But it seems Kevin’s enthusiasm for going is not just for sightseeing. He’s heard rumors of strange goings on, which has something to do with a long fabled gate of hell under the city. And the trio soon find their holiday cut short, when strange demonic creatures start rampaging through the holy city and the group end up running for their lives as the military struggles to contain the situation.

Filmed in and around the city of Jerusalem, whilst the film makes good use of its location, there were a couple of problems I had which spoiled my enjoyment. Firstly, it’s a “found-footage” style film, which I’m not a fan of. Sarah appears to be wearing a pair of “Google Glasses” (or something similar), and the entire film is told from the webcams perspective on these (a similar idea having already been done in “Day of the Mummy” which I wasn't keen on either).

Secondly, the film takes way too long to get going, almost an hour, with most of the runtime taken up showing the trio sightseeing. When things finally do kick off, the creatures are only seen on a handful of occasions, with the remainder of the film just showing the group running through the streets, hiding in buildings and crawling through tunnels trying to get to safety.

A potentially interesting idea badly done in my view.

The film is being screened as part of the Jewish Film Festival in London, at the JW3 cinema (10 Nov) and Odeon Swiss Cottage (18 Nov).

For more info about this and other films in the festival visit http://ukjewishfilm.org/
Posted by Dark Angel at 18:13