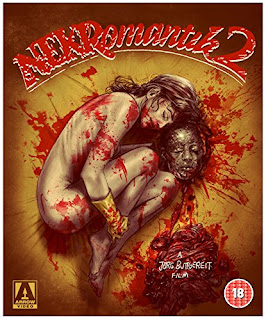 Arrow Video is thrilled to announce the UK Blu-ray and DVD release of the notorious sequel to the underground shocker Nekromantik. Jörg Buttgereit’s "Neckromantik 2" arrives in time for Christmas on 23rd November 2015.
One of 2015’s most anticipated Arrow Video releases, "Nekromantik 2" makes its home video debut in the UK as an exclusive 3-disc digipak featuring Blu-ray, DVD and CD Soundtrack. This exclusive set will be limited to a run of only 3000 copies only and comes with a set of 5 x exclusive ‘Polaroid’ postcards and a 100-page book, alongside a wealth of extra features.
This 3-disc set comes loaded with exclusive director-approved content including the main feature "Nekromantik 2" (1991) and will feature brand new extras especially produced for this release, chief among them, the documentary Masters of Life and Death, alongside new audio commentaries and introductions from director Buttgereit and other key members of the cast and crew including Monika M. Further details listed below.
Synopsis
Monika isn’t like other young women. She shares her small flat with Rob, a recently disinterred corpse which serves as the object of her affections. But then she meets good-natured Mark, and soon finds herself torn between the prospect of a ‘normal’ life with a living, breathing partner and her overwhelming desire for her rotting bed-fellow.
Once prosecuted in its native Germany for “glorifying violence”, Jörg Buttgereit’s follow-up to his ground-breaking Nekromantik is just as shocking as its reputation would suggest. But it’s also a profoundly moving (if decidedly twisted) love story, and a thought-provoking meditation on death – that most mysterious aspect of the human condition.
Special Features
3-DISC DIRECTOR-APPROVED LIMITED EDITION CONTENTS

· Exclusive perfect-bound book featuring new writing from Electric Sheep editor Virginie Sélavy, writer Kier-La Janisse and others, as well as a new translation of the article submitted to the German government as part of the Nekromantik 2 prosecution case, all illustrated with new artwork and original archive stills