"A Date With Ghosts" - a film review 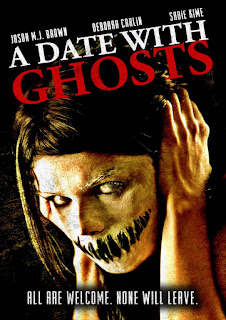 Whilst attending the Mayhem horror festival in Nottingham last month I got chatting to Director Jason MJ Brown, who was also attending and told me about his film “A Date with Ghosts”, which was shot around Nottingham. After expressing interest, he kindly gave me a review copy to look at, and having finally managed to view it, have decided to post my thoughts…
The basic plot goes something like this. A girl is on her way to meet her boyfriend, when she gets a frantic phone call from him, claiming he’s come across an injured girl in the grounds of a derelict abbey nearby.
Going back to meet him, the injured person has apparently run off, but as they explore the grounds trying to find her, they find themselves locked in. Stumbling into a nearby church, they discover another girl, bound up and trapped inside an old coffin, who informs them that evil forces are at work, and as the trio try to leave, find themselves attacked by undead apparitions wearing monks robes, who appear out of thin air.
Whilst this is going on, it seems there’s another couple trapped in the grounds, who are experiencing similar problems. Their paths eventually cross, and discovering the evil spirits can be thwarted using crucifixes and holy water, attempt to battle their way out together.
Now, whenever I review a film I am always brutally honest. The film was obviously very low budget and filmed on, what might well have been, a home camcorder (judging by the amount of shots the autofocus turned the picture blurry), though I won’t hold that against it.
The film does start off rather well with some atmospheric shots of old graveyards and a rather impressive title sequence and it makes the most of its abandoned location (Scarsdale Hall in Derbyshire appears to have been the principal filming location). But obviously, being a low budget film, suffers from the usual trappings. Chiefly the acting, which was far from brilliant and the “old” church, which looks very well maintained and even has modern electric lighting.
However, the main bug bear in this HAS to be the sheer disjointed nature of the plot. None of the characters are properly introduced. One person is called Lee, but that’s about the only name we get. We never do find out who the injured girl was they went to find in the first place. There's a mention that the police were at some point called, but no one shows up. We find that crucifixes work against the ghostly creatures, yet they seem to inhabit the nearby church which is filled with these things.
Then halfway through, the plot suddenly cuts to another group of people, who we had previously been unaware of, also trapped in the grounds, finding another person trapped in the church and seemingly repeating the events we just witnessed the last trio go through. It was like watching a short film, which the director decided to remake, but then decided to cobble both together to produce a feature length film.
Another major problem for me was the constant mixing up of day and night shots. When you’re suddenly confronted with daylight, having just spent the last 5mins in the dark, you’re never sure if its meant to be suddenly morning again, or the cameraman just got the aperture wrong when he filmed it.
The film was apparently shot over a 2 year period, which would explain the somewhat disjointed nature of the story and was the director’s first feature, which he managed to put together on a budget of just over £1000. Obviously the low budget shows through, but when you’re starting out, I guess you have to begin somewhere and work with whats available. The director seems to have done well for himself though, as the movie is currently on DVD in the US. Though whether you will like this will depend on your love of low budget indie horrors.
The director is currently working on his next feature, entitled “Dark Vale”, so we’ll have to wait and see what that is like.

Buy the US DVD at Amazon.com