*Aaaaaaaah!* comes to DVD/Blu-ray this Jan. 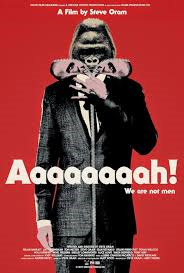 The most eccentric and radical film of recent years, Steve Oram's "Aaaaaaaah!" is coming to DVD and BD this January.
Alpha Male Smith and his Beta, Keith, move to take over a local community. They hook up with restless Female, Denise, igniting a deadly feud in which emotions run high and deep-seated grudges resurface amongst the tribe.
Are we not men? Or are we simply beasts? Get ready for the most unusual celluloid primal scream - an anarchic, hilarious, disturbing and touching look at the human condition. Recently nominated for the Discovery Award at the British Independent Film Awards, Aaaaaaah! makes you want to look away, and carry on watching at the same time. is a film that needs to be seen and heard.
You’ll either love it, or hate it, either way we can absolutely say, you won’t see or have seen anything like it. Funny, moving and shocking  - this one isn’t for the faint of heart.
Starring...
Toyah Willcox - Secret Diary of a Call Girl
Noel Fielding - The IT Crowd, The Mighty Boosh, Nathan Barley
Julian Rhind Tutt - The Hour, Green Wing, Lucy, Notting Hill
Tom Meeten - Paddington, Sightseers
Julian Barratt - The Mighty Boosh, Being Human, Nathan Barley
The film is already out on VOD and Download. The DVD and Blu-ray come packed with fantastic Extras including an insightful audio commentary with Steve Oram, the man with the vision.
Special Features:
Audio commentary with Steve Oram
Carolla Cooks - Carolla Cooks is a 10 min version of the cooking show you see at the beginning of the film with Shelley Longworth.
PUB! - Pub is the full 5 min version of the sitcom that the characters are watching at the end of the film. Stars Tony Way and Alice Lowe

The Cast Speaks
The DVD and BD are released Jan 16th and will be available to pre-order shortly.