Celebrate "Friday the 13th" with merch from Electric Zombie

2015 is a rare year in which horror fans are blessed with three Friday the 13ths. Pop culture brand Electric Zombie celebrated the first two with new merchandise, and you better believe they weren't going to let today's date pass them by without another drop. The latest line features shirts, posters and pins - some new designs, some old favorites - dedicated to the various incarnations of Jason Voorhees. 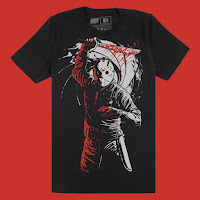 There are several shirts in stock: "Lurker," a bloody tribute to the machete-wielding killer, available on standard tees and baseball shirts; "0013," a James Bond-inspired design, which comes in both standard and glow-in-the-dark Powerglove variants; and "Manhattan,"  an all-over print of a red-and-blue hockey mask in homage to the Jason Takes Manhattan poster.

The line includes two posters. The first is dedicated to the original Friday the 13th. Adopting a vintage '80s style, the print makes reference to some of the classic film's most memorable characters and moments. The second poster comes from the franchise's sixth installment, Jason Lives, and is made to look like a gritty Japanese import.
Powerglove Pinhead is a 1" glow-in-the-dark enamel pin featuring the distinct 8-bit coloring of Jason's mask. Electric Zombie has also restocked the popular Dead Heads. Available in both classic and Powerglove versions, these Madballs-inspired rubber heads feature removable resin masks.
"This is the third Friday the 13th this year - holy smokes!" exclaims Electric Zombie owner Kyle Crawford. "I didn’t want to do a crazy Jason overkill, so I thought I would spice it up with a little bit of old and a little bit of new and a little bit of new-old."

The Friday the 13th collection is on sale now at TheElectricZombie.com.
Apparel from Electric Zombie's Halloween line - including products inspired by Trick 'r Treat, A Nightmare on Elm Street, Halloween III, Are You Afraid of the Dark, The Monster Squad and more - is still available as well.
Posted by Dark Angel at 18:04