Devil in the Woods comes to UK DVD in the New Year. 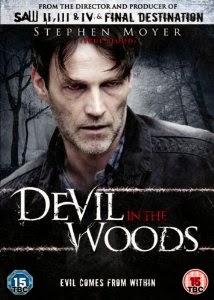 Richard Marlow (Moyer) is eager for his son, step-daughter and new wife to get along, so plans a family vacation to the reclusive Pine Barrens.

Desperate for real solitude, Richard leads them deeper into the woods where it quickly becomes clear that all is not peaceful as animals are found mutilated and horrifically killed. Struck down by illness, Richard and his family are stranded as the local legend of the ‘Jersey Devil’ that stalks the darkened woods, starts to haunt their thoughts.

What started out as a peaceful family trip ends up being a deadly nightmare.

Also starring Shawn Ashmore (X-Men trilogy), DEVIL IN THE WOODS is a visceral and bloody mix of horror and the supernatural and is released on DVD by Kaleidoscope Home Entertainment on 3rd March 2014.
Buy the UK DVD from Amazon.co.uk
Posted by Dark Angel at 18:23