Catch "Rabies" on the Horror Channel this December... 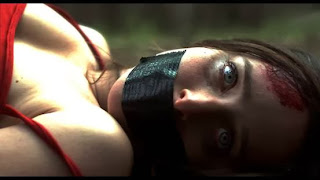 TV News (UK):  UK TV premiere for "RABIES", from "BIG BAD WOLVES" directors Ahron Keshales & Navat Papushado
Plus Horror Channel spreads a little evil on Christmas Day with the Network premiere of "CHRISTMAS EVIL" and there are network premieres for Bruce Campbell’s "MY NAME IS BRUCE" and Glenn McQuaid’s "I SELL THE DEAD".

Sat 28 Dec @ 22:50 – RABIES (2010)
In Israel’s first slasher movie, a runaway adult brother and sister stumble into a trap set by a psycho killer in. His sister buried in the ground, the injured brother sets out to get help. What he finds instead is a group of sex-mad teenagers, two sleazy policemen and a forest ranger and his dog. Making great use of collective expectations of where a body count movie is supposed to go, and then not going there, this is as much a fresh vision of fright as a nuanced social and political commentary on Israel today. A big hit at FrightFest, the directors, Aharon Keshales and Navot Papushado, went on to make the hugely successful BIG BAD WOLVES and have succeeded in revitalising Israel’s horror film industry.

Wed 25 Dec @ 22:50 – CHRISTMAS EVIL (1980)
Widely recognized as the best of the Christmas horror efforts, Christmas Evil is the story of a toy-maker scarred as a boy when he learns that Santa is not real. Throughout his life, he tries to make the Christmas spirit a reality. He becomes obsessed with the behaviour of children and the quality of the toys he makes. When he is met with hypocrisy and cynicism, the resulting snap causes him to go on a yuletide killing spree

Fri 20 Dec @ 22:55 – MY NAME IS BRUCE (2007)
A comedy horror, directed, co-produced by and starring B-Movie cult actor Bruce Campbell, ‘My Name is Bruce’ is the heroic struggle of a small mining town in Oregon to rid itself of a vengeful monster. Guan-di (Jamie Peck), the Chinese god of war and protector of the dead, has been unleashed by cemetery desecrating teenagers to protect the graves of Chinese miners lost in a deadly cave-in of yesteryear.

Fri 27 Dec @ 22: 55 – I SELL THE DEAD (2008)
Director Glenn McQuaid’s brilliant homage to 60s Amicus anthologies and Hammer horror was a hit at Film4 FrightFest 18th century justice has finally caught up with two of the craftiest grave robbers in town. With only a few hours to go before his date with the guillotine, body snatcher Arthur Blake (LOST and LORD OF THE RINGS star Dominic Monaghan) tells his life story to Father Francis Duffy (HELLBOY’s Ron Perlman).