Catch "Flu" at Cineworld this November... 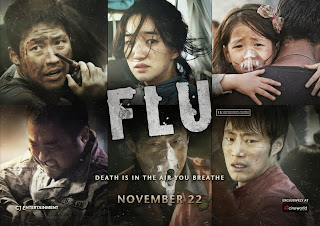 Death is in the air you breath at Cineworld cinemas in the UK this November, with the exclusive release of "FLU", Korea’s answer to "CONTAGION" and "OUTBREAK".
An airborne virus spreads at an alarming rate, 3.4 infections per second with 100% fatality and no known cure. The dangerous epidemic threatens to wipe out the population of the Korean peninsula and beyond.
After smuggling illegal immigrants into the country, a human trafficker is infected with an unknown virus and dies in a hospital in the highly populated metropolis of Bundang, a suburb of Seoul. Less than 24 hours after his death, similar cases and symptoms are reported all over the city. Helpless against the airborne virus, the population of Bundang is plunged into chaos as the infection rate soars.  In a desperate measure to attempt to prevent the spread of the outbreak to the capital, the rest of Korea and beyond, the government orders a complete shutdown of the city. An apocalyptic Bundang is divided into quarantine zones, as the fight for survival become increasingly personal. as some risk their lives to save those they love, while some risk others to save their own lives…
A box office smash when the film opened in South Korea in August, Director KIM Sung-su’s latest film is an impressive disaster movie on a truly epic scale, and is released in the UK only in Cineworld cinemas November 22nd.