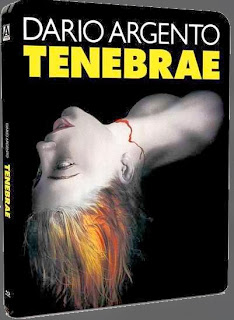 Arrow Video is pleased to present a brand new edition of Tenebrae. Remastered from original print materials by Wild Side Films in France and given the traditional Arrow Video technical treatment along with classic extras and newly added content Tenebrae is presented in a Limited Edition SteelBook featuring the original throat-slit artwork in beautiful shimmering steel.

This notorious horror classic returns in all its depraved glory. This infamous video nasty updated the classic Giallo blueprint for the gorified 80s, courting controversy and drenching the viewer in crimson arterial spray.

A razor-wielding psycho is stalking the horror writer Peter Neal, in Rome to promote his latest work, Tenebre. But the author isn’t the obsessive killer’s only target, the beautiful women who surround him are doomed as one by one, they fall victim to the murderer’s slashing blade…

Will fiction and reality blur as fear and madness take hold? Watch in terror as by turns the cast fall victim to the sadistic imagination of Dario Argento, Italy’s master of horror.