The Thing to invade UK homes this March 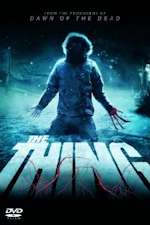 Ever wondered what really happened during the events leading up to the original film The Thing?  Get ready to find out where it all began as the chilling prequel to John Carpenter’s sci-fi horror classic crashes onto Blu-ray with Digital Copy, DVD and download to own this March from Universal Pictures UK.
If you’re a fan of the original’s body-shock horror and creepy, suspenseful atmosphere, then brace yourself for a terrifying ride as events unfold at an isolated Antarctic research site immediately prior to the original film. A spine-chilling prologue to the sci-fi saga of the same name, The Thing introduces a whole new generation of fans to one of the most unforgettable and gruesome horror stories of all time.
Starring Mary Elizabeth Winstead (Final Destination 3, Death Proof), The Thing sees a group of research scientists accidentally stumbling on the existence of a frozen alien craft in remote Antarctica.  Follow the horrifying fall-out of a decision to bring the craft and its deep-frozen inhabitant back to base camp as the scientists battle to contain the terror they have unwittingly unleashed.
With stunning, out-of-this-world special effects and a must-see storyline that fills in the many unanswered questions from the original, The Thing is an action-packed rollercoaster ride of jumps and thrills – truly unmissable in high definition Blu-ray!
Packed with hours of special features the DVD and Blu-ray discs both feature extensive bonus content including making of features, commentaries with the director and producer and both deleted and extended scenes. In addition, a must for any horror fan, is the new two-disc boxset that features not only this year’s gripping prequel, but also John Carpenter’s original classic movie The Thing from 1982. Both the DVD and Blu-ray boxsets contain a plethora of additional content allowing you to delve further and deeper into this iconic horror franchise’s universe than ever before.
The Thing is released to UK video shelves on 26 March.