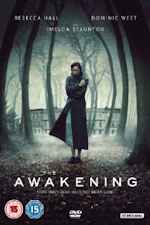 Set in 1921, in a post-war England, Florence Cathcart (REBECCA HALL from THE TOWN) is committed to debunking supernatural claims, using methodical and rational explanations. When she is asked to visit a boarding school in the countryside called Rookwood - to investigate the alleged sightings of a ghostly young boy - she feels compelled to take the job.
But over the coming days the blurred image of a child-like ghost haunts Florence and she begins to doubt her resolve, increasingly unable to provide any logical explanation for the bizarre goings-on.
The film also stars DOMINIC WEST (THE WIRE) and IMELDA STAUNTON from (VERA DRAKE).
Special Features:
Audio Commentary with Writer-Director Nick Murphy
Behind the Scenes
A Time For Ghosts
Trailer

Buy the BR & DVD double pack at Amazon.co.uk
Posted by Dark Angel at 19:59