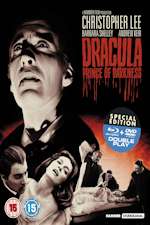 STUDIOCANAL are undertaking a joint restoration project with HAMMER FILMS to restore and release on DVD and as blu-ray premiers, some of their most iconic horror titles.
Starting March 5th with one of Hammer's most iconic characters, they will be releasing a DVD and Blu-ray double-play combo pack of DRACULA PRINCE OF DARKNESS, starring Christopher Lee and Barbara Shelley. Along with the fully restored film, there will be a comprehensive extras package produced in association with Hammer expert and author Marcus Hearn!
Four English tourists find themselves stranded in the mysterious village of Karlsbad, a sinister and remote place of deadly, dark legend. Their journeyleads them to an abandoned castle where a nightmarish destiny awaits them. However, it wasn’t just fate that brought them here, but an evil force in need of resurrection, a blood craving beast known only as Count Dracula, Prince of Darkness. Released in 1966 this is Christopher Lee’s second outing as Dracula, with Hammer Films pushing the cinematic boundaries of graphic gore and terror.
Extras: Commentary featuring Christopher Lee, Suzan Farmer, Francis Matthews & Barbara Shelley / World of Hammer episode “Hammer Stars: Christopher Lee” / Back to Black / Super 8mm Behind the Scenes footage / Restoration comparison / Trailer / Double bill Trailer / Original USA Titles / Orginal Print UK Theatrical Titles.
Further titles to be released in this restoration programme will include THE REPTILE and THE PLAGUE OF ZOMBIES, both arriving to blu-ray for the first time on May 7th, with more to follow later this year.
Buy online at Amazon.co.uk
Posted by Dark Angel at 20:06