Sometimes They Come Back on DVD!!!!! 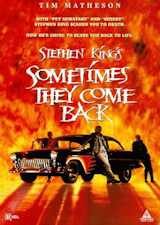 Fans of the film "Sometimes They Come Back" can finally do away with their old VHS copies, as the film is set to finally hit UK DVD this April.
Based on a story by the master of horror Stephen King, Teacher Jim Norman (Tim Matheson) reluctantly returns to his hometown to a job at the local school, almost 30 years after he left. Bad memories linger in the town where his brother Wayne was killed by a local rebel gang and he escaped unharmed.

Those responsible died in fiery car wreck, but sometimes the dead aren’t ready to die and come back to take care of unfinished business, in this dark twisted tale of vengeance by the undead.

Directed by Tom McLoughlin (Friday the 13th Part 6 : Jason Lives), the film comes to UK DVD for the first time on 9 April 2012, courtesy of Second Sight.
Buy the DVD at Amazon.co.uk
Posted by Dark Angel at 19:47

Email ThisBlogThis!Share to TwitterShare to FacebookShare to Pinterest
Labels: sometimes they come back uk dvd