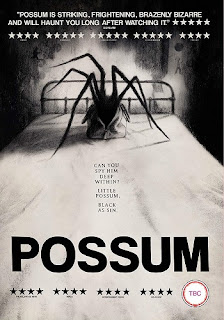 POSSUM is a distinctive psychological thriller which pays homage to the British horror films of the 70s. The film’s unique and stylish exploration of a man’s isolation and abandonment is accompanied by a compelling soundtrack from the legendary electronic BBC music studio The Radiophonic Workshop. Following its release in cinemas to wide critical acclaim, POSSUM will be released on Blu-ray, DVD and Digital HD on 4 March.

The story follows disgraced children’s puppeteer PHILIP (Sean Harris), returning to his childhood home of Fallmarsh, Norfolk, intent on destroying Possum, a hideous puppet he keeps hidden inside a brown leather bag. When his attempts fail, Philip is forced to confront his sinister stepfather MAURICE (Alun Armstrong) in an effort to escape the dark horrors of his past.

Known to audiences as his alter ego ‘Garth Marenghi’, Matthew Holness wrote and starred in Garth Marenghi’s Darkplace (Channel 4) before moving into directing. His short films include Smutch (Sky Arts), A Gun for George (Film4) and The Snipist (Sky Arts). POSSUM is his first feature and was originally written as a short story for The New Uncanny, a 2008 Comma Press anthology themed around Freud’s essay ‘Das Unheimliche’.

Matthew says “For the film I chose to concentrate more fully on the story’s true ‘monster’, a real-life horror more frightening than any supernatural presence. My desire was to make a modern ‘silent’ horror, with little dialogue or connection with the outer world. This is, after all, a film about silence. Philip’s isolation and abandonment. His loneliness. His terror of speaking out.”

The DVD and Digital releases will contain the film only.