THE BIG CLOCK AND DEMON LOVER coming from Arrow Academy 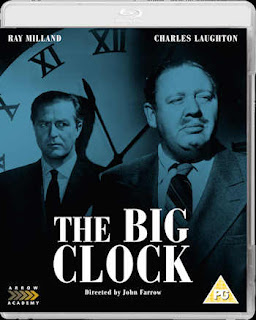 Adapted by acclaimed screenwriter Jonathan Latimer from a novel by the equally renowned crime author Kenneth Fearing, The Big Clock is a superior suspense film which classily combines screwball comedy with heady thrills.

Overworked true crime magazine editor George Stroud (Ray Milland, The Lost Weekend, The Pyjama Girl Case) has been planning a vacation for months. However, when his boss, the tyrannical media tycoon Earl Janoth (Charles Laughton, Witness for the Prosecution), insists he skips his hols, Stroud resigns in disgust before embarking on an impromptu drunken night out with his boss's mistress, Pauline York (Rita Johnson, The Major and the Minor).

When Janoth kills Pauline in a fit of rage, Stroud finds himself to have been the wrong man, in the wrong place, at the wrong time: his staff have been tasked with finding a suspect with an all too familiar description... Stroud’s very own!

Directed with panache by John Farrow (Around the World in 80 Days), who stylishly renders the film’s towering central set, the Janoth Building, The Big Clock benefits from exuberant performances by Ray Milland and Charles Laughton, who make hay with the script’s snappy dialogue. A huge success on its release, it is no wonder this fast-moving noir was remade years later as the Kevin Costner vehicle No Way Out. 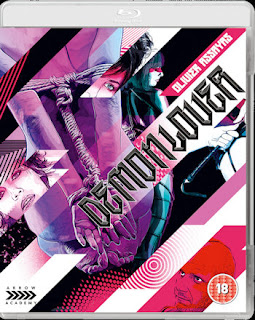 Twenty years after David Cronenberg prophesied the dark side of the Internet age in Videodrome, acclaimed French filmmaker Olivier Assayas (Irma Vep) updated it for the New Millennium in his startlingly prescient Demonlover, a chilling exploration of the nexus between sex and violence available at the click of a button.

However, the company is only the front for an online portal to the Hellfire Club, which gives its users control over the next big thing in interactive extreme pornography: real women, tortured according to subscribers’ whims, in real time. Diane wants a piece of the action, and will stop at nothing to get it; but as she delves deeper into the twisted world of the Hellfire Club, reality slips away and the stakes of the game are raised to the point of no return.

Armed with an iconic score by art-rock pioneers Sonic Youth, Assayas’ neo-noir/cyber horror masterpiece is finally unleashed for the first time on Blu-Ray, with revealing extras and a new director-approved restoration.