In The Aftermath - on Blu-ray from 6 May 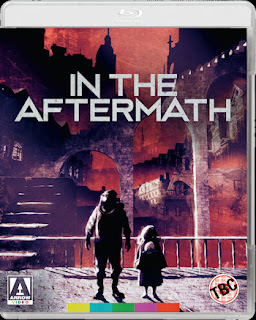 Following in the footsteps of Francis Ford Coppola and Peter Bogdanovich, Roger Corman protégé Carl Colpaert (The Crew) made his directorial debut by combining repurposed excerpts from a foreign film – in this case, Mamoru Oshii’s (Ghost In The Shell) spellbinding 1985 anime Angel’s Egg – with new live action footage shot in America. The result is In The Aftermath, a haunting post-apocalyptic vision like no other.

In a radiation-soaked wasteland, two surviving soldiers, Frank and Goose, search for essential supplies amid the rubble. After a violent confrontation, Frank is haunted by visions of an angelic young girl holding a giant egg, herself a refugee from another world altogether. Could the egg be the key to saving both their worlds?

A unique mash-up of 1980s B-movie nuclear paranoia and hauntingly lyrical animation, In The Aftermath is presented in a stunning new restoration that highlights Oshii’s visionary genius and Colpaert’s low-budget ingenuity.

The Annihilators – on Blu-ray from 13 May 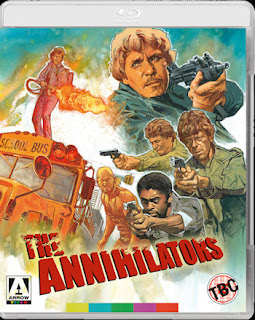 As the 1980s rolled on, a new, bullish attitude to war took hold in America, the weary cynicism of the previous decade giving way to an unabashed celebration of military might. Numerous filmmakers and producers sought to capitalise on the emerging mood… among them New World Pictures, the company founded by the legendary Roger Corman.

In The Annihilators, the war comes home as a group of army vets, battle-scarred from their travails in the jungles of Vietnam, are forced to dust off their combat moves once again when one of their own meets his demise at the hands a violent criminal gang. Deciding that enough is enough, the self-styled Annihilators, led by the redoubtable Bill (Christopher Stone, The Howling, Cujo), set out to equip the beleaguered citizens of downtown Atlanta with the skills they need to rid their streets of crime and vice.

Directed by Charles E. Sellier Jr. (Silent Night, Deadly Night) and co-starring Gerrit Graham (Phantom of the Paradise) and Lawrence Hilton-Jacobs (Death Wish), The Annihilators is a brash, no-holds-barred slice of vigilante justice from the golden age of B-movie action. 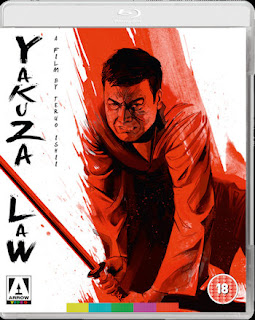 Director Teruo Ishii (Blind Woman’s Curse, Horrors of Malformed Men), the Godfather of J-sploitation, presents Yakuza Law (AKA Yakuza’s Law: Lynching) – a gruelling anthology of torture, spanning three district periods of Japanese history and bringing to the screen some of the most brutal methods of torment ever devised.

In this deep dive into the world of the Yakuza, meet the violent men who rule the Japanese underworld and the cruel punishments inflicted on those who transgress them. The carnage begins in the Edo Period with a violent tale of samurai vengeance starring Bunta Sugawara (Battles Without Honour and Humanity), before shifting to the Meiji Period as the exiled Ogata (Minoru Oki, Shogun Assassin) returns to face punishment for his past transgressions… and, ultimately, to take his revenge.

Brutal, bewildering and definitely not for the faint-hearted, Yakuza Law represents Japanese popular cinema at its most extreme… and most thrilling.

Mega Time Squad – on Blu-ray from 20 May 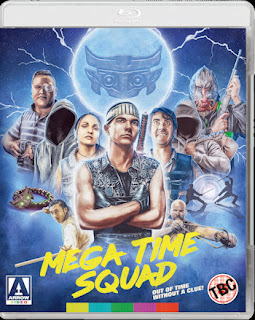 Welcome to Thames, New Zealand. Population: 7,518 – and falling. Unless of course you’re Johnny (Anton Tennet), the new member of a local gang led by Shelton (Jonathan Brugh, What We Do in the Shadows). He’s multiplying.

After Johnny is foiled in an effort to double-cross Shelton at his own game of masterminding the sleepy town’s unsurprisingly tame criminal underbelly, he inadvertently steals an ancient bracelet with which he can turn back time – and in the process create multiple clones of himself. This gives Johnny the ability to literally form his own gang against Shelton’s. The only problem is: how can you learn to live your best life, when you’re also having to figure out which one of you exactly that is? Oh, that and there’s a demon after him for bending the rules of time, physics and just general common sense.

Tim van Dammen directs this 80s-throwback supernatural crime caper, dubbed by critics as “a grounded sci-fi mini-odyssey with lots of creativity and even more laugh-out-loud gags”, in which a brilliant ensemble works with sharp dialogue to deliver an endearingly odd and endlessly entertaining slice of Kiwi life.

Trapped Alive – on Blu-ray from 20 May 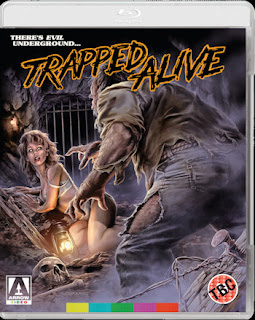 Genre regular Cameron Mitchell (The Toolbox Murders, From a Whisper to a Scream) stars in this thrilling tale of escaped hoodlums and underground-dwelling cannibals from director Leszek Burzynski and Hellraiser producer Christopher Webster.

One wintry night, pals Robin and Monica are making their way to a Christmas party when they’re carjacked by a gang of crooks recently escaped from the local penitentiary. With the two young women taken as hostages, things take an even darker turn when their vehicle plummets down an abandoned mine shaft, trapping them underground with the dangerous crooks - and a mutant cannibal.

Filmed in 1988 under the title of Forever Mine but not released until 1993, Trapped Alive was the first film to come out of Wisconsin’s now-defunct Windsor Lake Studios, which would go on to produce a number of films under the Fangoria Films label in the early-90s, including 1992’s Bruce Campbell-starring Mindwarp.