EVIL DEAD 2, is coming to 4K Ultra HD for the first time

WATCH THE NEW 4K TRAILER BELOW:

After the shocking and notorious cult classic THE EVIL DEAD impaled its way into the minds of a whole generation, visionary maverick director Sam Raimi decided to elaborate on its twisted scenario. Featuring B-movie legend Bruce Campbell in his most iconic role, EVIL DEAD 2 is a gore-fueled, splatstick masterpiece that gleefully stomps on the entrails of good taste whilst puking in the face of Hollywood with no apologies.

This thrill-packed, gore-led rollercoaster ride is a must-see for all horror fans and comes packed with over four hours of special features – including the new one-hour bonus feature BLOODY AND GROOVY, BABY! EVIL DEAD 2 will arrive on 4K Ultra HD, Blu-ray, DVD and Digital Download on 4th March 2019 and is available to pre-order now

The film is also available on Blu-Ray only with the same extras, there is also a DVD release containing the audio commentary only. 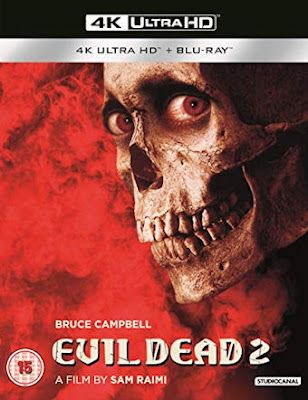