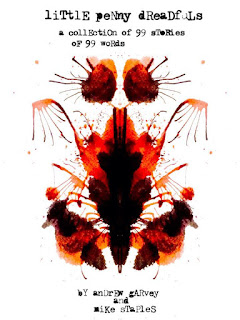 Little Penny Dreadfuls, a collection of 99 dark and twisted stories of 99 words is available now, worldwide for the Amazon Kindle.

Beginning as an experiment in writing flash fiction, Little Penny Dreadfuls developed into a cross-border collaboration between Andrew Garvey and Mike Staples. The collection includes stories about iconic horror subjects like ghosts, serial killers, zombies and vampires and the authors’ own nightmarish creations and dark visions.

Perfect for readers who want quick fixes of neatly distilled horror, and those looking to sample some new, nastily imaginative ideas, Little Penny Dreadfuls retails for just 99p in the UK and $1.49 in the US, and similar prices at every Amazon outlet worldwide.

This Kindle exclusive collection is also available for subscribers to the Kindle Unlimited service and through the Amazon Prime Kindle Lending Library.

-Surreal Estate
We’d been looking at houses the whole weekend.  Both city apartments had sold; we would marry in May and needed the perfect home.  One disappointment followed another until, perfection.  It sat just beyond the town’s limits, nestled behind ancient woodland, in a full acre of concealed land.  As we climbed the front steps, over the stoop with rocking-chair intact, we locked eyes and agreed, we’d fallen in love.  We turned the key and stepped inside.
Only from the master-bedroom did we see the noose hanging from the old oak.  Grass beneath still stained red.  She smiled, “Darling, it’s perfect.”

-She Fluttered
She fluttered softly, delicately patterned wings glinting in the pale moonlight.  She checked her list, a tiny scroll of elegant calligraphy giving the boy’s name and age.  She danced and dived and spun in the air, filled with such happy thoughts and glee.  She hovered over his pink cherubic face as he slept the sound, deep sleep of the innocent.  She took out a hammer and working with magical speed, smashed out every one of his teeth and scooped them up, listening to them rattle together in her miniature burlap sack as she flew away, chased by his screams.

About the Authors
Andrew Garvey has been fascinated by horror since his aunt let him watch An American Werewolf in London when he was five years old.  His short stories on vampires and Victorian professional wrestling and the final, rotting survivor of a zombie apocalypse have been published in anthologies by Red Rattle Books – ‘Dracula’s Midnight Snacks’ and ‘Zombie Bites’.  He also writes non-fiction about mixed martial arts for Fighters Only magazine and about horror and history for www.spookyisles.com and runs the @News_of_1890s Twitter feed.  He lives in Staffordshire with his girlfriend, son, bull terrier and books.

Mike Staples stumbled accidentally into writing dark fiction.  A head full of dystopian ideas, he started writing songs for music project luciensghost.  The development of songs and accompanying short stories for multi-disciplinary arts events in Glasgow based around ‘The Undead’ and ‘Ghost Stories’ provided a platform for further dark musings.  Mike also had work published in ‘Dracula’s Midnight Snacks’ and ‘Zombie Bites’, leading to the creative partnership behind this book.  He lives in Moniaive in Southern Scotland with his wife and three sons, with another expected in the summer.  luciensghost release their debut EP in 2015.