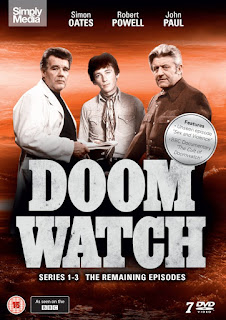 Groundbreaking classic British sci-fi series Doomwatch originally aired on the BBC from 1970 – 1972 and at its peek, attracted in excess of 13.6 million viewers and spawned two film adaptations. Although in huge demand, it has never before been available on DVD, until now... Thanks to Simply Media Doomwatch Series 1-3 makes its long awaited DVD debut.

Not all of the episodes made it but the ones that still exist come to DVD as Doomwatch Series 1-3 The Remaining Episodes on 4 April 2016. The available episodes will be released in a stunning seven-disc box set, together with unseen episode ‘Sex and Violence’ and the BBC documentary ‘The Cult of Doomwatch’.

The cult series is the brainchild of Kid Pedler and Gerry Davis, the men responsible for Doctor Who’s iconic Cybermen, and follows government agency The Department of Measurement of Scientific Work AKA Doomwatch, as they fight to protect mankind from all manner of horrifying technology and experiments gone wrong.

Set in a time of public fascination with the perils of science and technology, Doomwatch offers a glimpse of real scientific concepts, that are still relevant today and explores the moral dilemmas faced by those left to pick up the pieces when things inevitably go wrong.

A must for any discerning sci-fi and classic TV fan.