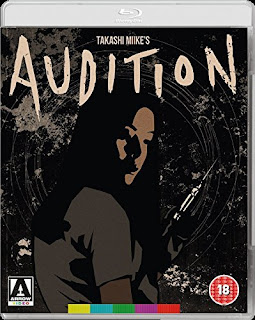 Set in Japan, film producer Shigeharu Aoyama (Ryo Ishibashi – “The Grudge”) has spent the last 7 years bringing up his child alone, following the death of his wife. His son is now well into his teens, and has begun bringing home girls from school and convinces him that maybe he should start dating again.

However, being a little out of practice, he and his friend Yasuhisa (Jun Kunimura – "Kill Bill") come up with a cunning plan to get him back in the game. Using their film company as a front, they hold a series of auditions for a film, which is really just an excuse for them to meet aspiring actresses.

When Shigeharu interviews a young actress named Asami (Eihi Shiina - "Tokyo Gore Police") he becomes quite enamoured with her and the two quickly spark up a friendship, which quickly develops into a relationship. But when he attempts to do a little digging into her past, he soon discovers that she is not who she appears to be and things take a sinister twist when he finds he is not the first middle aged person to fall for her charms and what has happened to her previous lovers…

Originally released back in 1999, this one garnered a lot of notoriety for its graphic torture sequences. However, I personally found this one to be a bit on the slow side as it takes an awful long time to get where it wants to go. Plus there were these bizarre dream like sequences which showed Asami’s back story, but were done in such a surreal way I wasn’t too sure what I was supposed to be watching (and what was with that guy in the bag?????).

Be that as it may, the film has gathered a huge following, and its status as a cult film is firmly cemented amongst Jap Horror fans.

There have been many releases of this film up till now, however this one looks set to be the definitive version. Boasting a new 2k scan from original vault elements, 5.1 audio track, the discs also come loaded with the following special features….

Lastly you get the Japanese and European trailers and a photo gallery of production stills.

The film is available as a stand alone Blu-ray, which has a reversible sleeve containing alternate artwork and in a limited edition Steelbook which also contains a DVD version of the film.

Pre-order the UK Steelbook from Amazon.co.uk