Ahead of the UK Premiere of THE MIND’S EYE at the Glasgow Film Festival, FrightFest probes the mind of director Joe Begos. 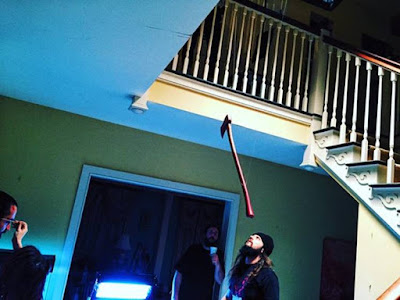 Q: Have you got your love of 80s movies out of your system now?

I'm not sure! A lot of it comes through as organic as that's what my brain sponged in at the most impressionable movie-going age possible. I definitely would love to make some more contemporary movies in the future but I feel like no matter the time period, the aesthetic of the 80's (all practical, fun, sensationalized filmmaking) will bleed through.

Q: Brian De Palma or David Cronenberg? Which director had the most inspirational impact on THE MIND’S EYE?

I think they both seeped through, as I love the stories and imagery that Cronenberg has come up with, though the highly technical and orchestrated filmmaking process of Brian De Palma was equally important.

Q: Actor Graham Skipper stars again like he did in ALMOST HUMAN, and you wrote the part of Zack Connors for him, Why do you like him so much, what does he bring to your table?

Graham has so many qualities that I like as an actor, it's hard to single out specific ones. For this film in particular, I feel his blue collar, regular look really helped attribute to the "off-the-grid drifter" feel, and his giant bulging eyes were integral to the telekinetic scenes. No matter what you put on the page, Graham is willing to transform himself into it and give you whatever you need to make what's in your head a reality.

Q: John Speredakos brings new meaning to the words over-the-top as Dr Slovak, his idea or yours?

I think it was a combination of us both finding the rhythm and tone. It's a delicate balance in something like this, but between his performance and the editing, i feel like we were able to strike it just right.

Q: It’s quite a romantic movie too? Are you going soft on us?

Q: Great to see Larry Fessenden play Zack’s father, do you see him as a creative mentor?

It was a dream come true to have Larry in the film. His whole attitude towards filmmaking and the art form in general, even after all of his success really is something to behold. To see him having fun on set and be proud of his work in the film was unbelievable.

Q: Steve Moore’s soundtrack is absolutely brilliant, and complements the movie so much.   Where did you find him?

Steve is amazing. Steve is a member of the fantastic synth horror band ZOMBI, and I became a fan of his work through that. I reached out to him, and in some weird twist of fate he had just watched ALMOST HUMAN. It really did work out perfect, as I can't think of somebody better who could have complemented the movie as well.

Q: You had a cameo in ALMOST HUMAN, why not here?

I actually do! I'm on the other side of the pay phone during the phone call. I just haven't credited myself on IMDB yet.

Q: What did you learn shooting ALMOST HUMAN that you applied here?

Never shoot a movie in 18 days.

Q: What was the best thing that happened while you were filming?

The fact that it was the worst winter in decades. It was a nightmare to shoot, but that snow looks INCREDIBLE, and we certainly never planned for it.

THE MIND’S EYE screens as part of FrightFest Glasgow 2016 on Fri 26th Feb at the GFT Screen 1, 9.00pm. Joe Begos will be in attendance.
To book tickets: http://tickets.glasgowfilm.org/en-GB/categories/frightfest