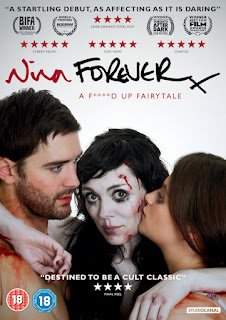 The darkly humoured “Nina Forever”, from director brothers Ben and Chris Blaine, is undoubtedly the most bizarre and not to mention bloodiest, love story you are liable to see this year, which is out this month on UK DVD and BD.

Former Hollyoaks actress Abigail Hardingham plays medical student Holly, who works part time at the local supermarket to help pay her way through university. She becomes interested in one of her co-workers, Rob (Cian Barry), who recently lost his  girlfriend in a car crash and the two subsequently strike up a relationship.

Unfortunately, their first night of passion is interrupted by the sudden appearance of the mangled corpse of Rob’s ex-girlfriend Nina (Fiona O'Shaughnessy - TVs "Utopia") who emerges “Hellraiser” style from the mattress beneath them, covered in blood and clearly disapproving of Rob’s new choice of girl.

The film subsequently follows the couple as they try to deal with these unwanted intrusions into their love life. As Nina periodically pops-up whenever they try to get physical, resulting in some exceptionally awkward and bloody ménage-a-trios.

“Nina Forever” is certainly a very strange film, but its also tremendous fun and most defintiely lives up to its tag line “A F****d up Fairy Tale”. I was also very surprised to see David Troughton in this (son of the legendary Patrick Troughton), particularly given some of his lines of dialogue.

I was given the DVD to review, which comes with the following special features. However I'm told these are also included on the BD

First of all there are 2x audio commentary tracks that accompany the main feature. One with Director of Photography Oliver Russel, Production Designer Damien Creagh and Costume Designer Imogen Loveday. The other with Sound designer Steve Bond, Music composer Daniel Teper and singer-songwriter Mara Carlyle.

Things that are not there (40 mins) quite a lengthy look at the deleted scenes in the film, which are introduced by the Blain brothers, discussing why the scenes where left out of the film.

Things that were not there (9mins) which is essentially a collection of out-takes, story boards and make up test footage.

The film went down a storm at last years Mayhem Festival in Nottingham and has been very well received on the festival circuit on the whole. So if you love dark comedies, you’ll definitely want to check this one out.