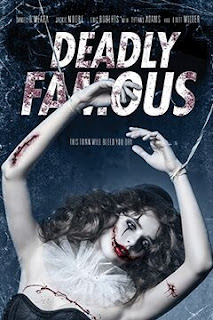 The film stars Daniel O’Meara (John Carter, Iron Clad) as a washed up actor, who takes his craft a little too seriously, to the point of having an Obsessive Compulsive Disorder about it. Having lost his fame, he finds himself struggling to even get roles in low budget B-movies, as directors find his overly professional approach far too over bearing.

But acting isn’t his only connection to the movies, seems he also likes producing his own real-life horror films, with unsuspecting female members of the public as the victims, and the film follows him as he struggles from one audition to the next, inbetween filming his own snuff movies.

Also starring Jackie Moore (Pernicious) as his ex-girlfriend, and Eric Roberts as… well… Eric Roberts, the film is shot in the style of one of those “True Crime” documentaries, complete with an opening announcement about how “The LAPD responded to an incident at a house back in 2010 and uncovered one of the most brutal crimes in the department’s history” and features interviews with his agent and friends, with footage from his own home videos.

The film is partially told from a first person perspective or found footage style, which is fine given the pseudo documentary nature of this. However, the problem I had was the plot seemed to be very disjointed, as I had no real idea what was going on, or why he was behaving the way he was.

If you enjoy low budget B-movies you may want to give this one a go, but personally I found it way too slow and disjointed.

The film is out now at selected VOD outlets.