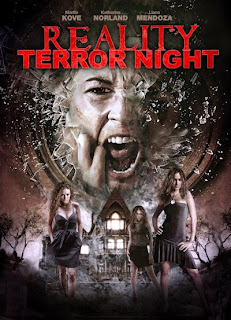 One for my US visitors, Lightyear Entertainment has announced the release of a new horror film, "Reality Terror Night", on DVD and Video On Demand in the US, as well as download to own and rent, on September 10, 2013.


In the film, five beautiful girls win a contest to star in a new reality show. Spend a night in a haunted house…first one to make contact with a ghost wins. What they don’t know is that the house is really haunted by a vicious killer who intends that none of them will win.

The DVD will be released in the U.S. and Canada through Entertainment One Distribution. It will debut day-and-date on Video on Demand, on Comcast, Time-Warner, Cox, Charter, Verizon, GCI, Mediacom, Suddenlink, and various other carriers. At the same time, it will be made available for digital download and rental through Amazon, iTunes, Vudu, Cinemanow, Google, Playstation, and Xbox.