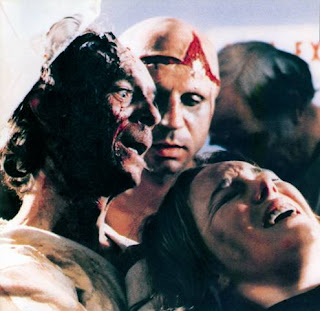 The UK Horror Channel is giving Italian horror maestro Lucio Fulci a much deserved season this August, comprising of four of his most memorable films. Genre classics that were either banned or heavily censored in the during the late seventies, early eighties.

Fulci, the forerunner of Italian splatter, once said that violence IS Italian art, and who would disagree with him when you look at the line-up, which comprises such ground-breaking master-pieces as the 1979 iconic "Zombie Flesh Eaters" (Sat Aug 3, 22:55) and the 1981 zombie shocker "House by the Cemetery" (Sat Aug 24, 22:55). Both are network premieres.

The season will be exclusively hosted and introduced by Fulci’s music maestro Fabio Frizzi and Spencer Hickman from Death Waltz Records.