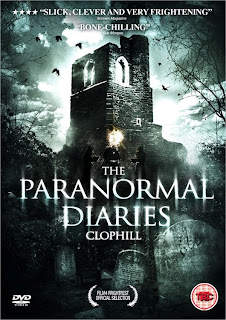 From the makers of "The Zombie Diaries" comes a brand new British horror, "The Paranormal Diaries : Clophill", which will be making its debut at this years Frightfest in London, ahead of its DVD release.
In 1963, a black mass was held within the ruins of a church in the small English village of Clophill. During which, tombs were desecrated and animals were sacrificed.
Fifty years on, following numerous reports of strange apparitions ever since that ceremony, a film crew assembled to interview witnesses and set up camp within the church ruins. During the night, they hoped to capture some kind fo paranormal presence on camera.
Nothing however could have prepared them for the terrifying scenes they were about to witness or the harrowing events that followed.
The film is premiering at Frightfest, then will be released to DVD October 14th by Second Sight films, in time for Halloween.
Extras on the disc include...
Audio commentary with the writer and director.
Audio commentary with the cast and crew.
Tales from the Graveside - Deleted scenes feature.
You can pre-order the DVD from Amazon.co.uk