Dressed to Kill on UK Blu-Ray 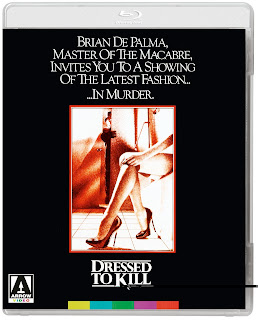 Arrow Video is pleased to announce the UK Blu-ray debut of Brian De Palma’s erotic crime thriller DRESSED TO KILL on Monday 29th July.
One of De Palma’s best loved films, DRESSED TO KILL has been lovingly re-mastered by MGM studios, and will finally be available uncut and on blu-ray for the very first time in the UK. Arrow’s deluxe edition of the film will come loaded
Starring legendary British actor Michael Caine (The Italian Job, Harry Brown) alongside Nancy Allen (Carrie, Robocop) and Angie Dickenson (Point Blank, The Killers), DRESSED TO KILL begins as sexually frustrated housewife Kate Miller (Dickenson) consults her psychiatrist about her husband’s lacklustre performance in the bedroom.
Following the session with Dr Elliot (Caine), Kate silently seduces a stranger in a New York Art gallery, before going back to his place. Upon leaving the man’s apartment, Kate is brutally murdered in the elevator; the only witness is high-end prostitute Liz Blake (Allen), who is in-turn accused of the murder.

One of De Palma's darkest and most controversial suspense thrillers, DRESSED TO KILL was as acclaimed for its stylish set-pieces and lush Pino Donaggio score as it was condemned for its sexual explicitness and extreme violence.

Buy the Blu-Ray from Amazon.co.uk