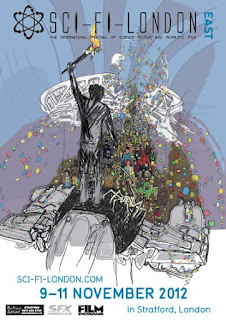 SCI-FI-LONDON EAST - Starts 9th November!
According to the Mayans, it's all over in December this year. So, what better way to prepare than watch monsters, mutants and the military try to make sense of it all.
We are delighted to be teaming up with Picturehouse Cinemas and bring our festival to Stratford. We kick off on Friday 9th and run though to Sunday 11th November. We screen some amazing films and have a few special events in the bar.
Full details are on the website, but here are a few highlights:
ANTIVIRAL
Fresh from its UK premiere at the London Film Festival, we are delighted to be screening this biting satire on the contemporary obsession with celebrity culture, from Brandon (son of David) Cronenberg. Which is also a warning about the powers, and inherent dangers, of the big pharmaceutical corporations.
THE HUMAN RACE
UK premier from Director, Paul Hough, who made the award-winning short THE ANGEL. Eighty people from totally diverse backgrounds suddenly find themselves in an undisclosed location where they are expected to compete in a race with the simple rule "Race or die." Will it be survival of the fittest or a show of humanity?
Makes The Hunger Games and Running Man look like a Sunday perambulation in the park.
ALLNIGHTERS
What would a SCI-FI-LONDON festival be without our notorious all-nighters. Once again we bring you a collection of our favourite MST3K episodes and a superb line-up of new anime titles.
Films include TIGER AND BUNNY, JOURNEY TO AGARTHA, GINTAMA and GYO: TOKYO ATTACK FISH!
Book now to avoid disappointment.
As well as great film, we have a masterclass in disaster survival, chats with writers about PA fiction and a tough post-apocalyptic pubquiz!
So grab your cricket bat, sword or weapon of choice and join us for the some fun.
For more info and to book tickets visit http://www.sci-fi-london.com/