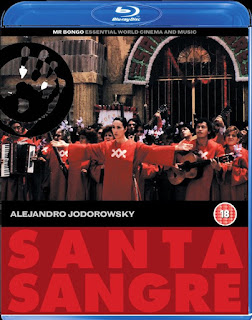 Mr Bongo Films are delighted to announce the release of one of the weirdest, strangest and visually stunning films you’ve ever seen, appealing to cineastes, horror buffs, drive-in movie fans, heads, freaks and weirdoes… It is Santa Sangre (Holy Blood), a mind trip of a film.
Described as one of Alejandro Jodorowsky’s finest films Santa Sangre received huge critical acclaim on its initial release, and now Mr Bongo Films presents the phenomenal masterpiece in a version that fully highlights this visual feast on DVD and Blu-ray on 5 November 2012, which has been extensively digitally remastered and comes packed full of special features.
Written and directed by Jodorowsky along with Claudio Argento and Roberto Leoni, Santa Sangre is a terrifying, psychedelic horror. Set in Mexico it tells the story of a boy who grows up in a circus. We follow in flashback and flash forward the young Fenix (played by Jodorowsky’s son Adan) who witnesses a horrifically brutal incident between his mother and father which sends him insane and as an adolescent (played by Jodorowsky’s older son Axel), as he is leaves an asylum into the care of his crazed, vengeful mother.
Alejandro Jodorowsky is a Chilean-French filmmaker, playwright, actor, author, comic writer and spiritual guru. Best known for his avant-garde films, he has been ‘venerated by cult cinema enthusiasts’ for his work which is filled with violently surreal images and a hybrid blend of mysticism and religious provocation. Santa Sangre is the ultimate midnight movie, the cult film to end all cult films.
Special Features include.
DISC ONE
• Main feature
• Optional commentary by Jodorowsky and journalist Alan Jones
DISC TWO
• Alejandro Jodorowsky's Cult Cinema
• La Constellation Jodorowsky by Louis Mouchet
• Deleted scenes with commentary from Jodorowsky and journalist Alan Jones Jodorowsky interview at ICA London (2002)
• Echek - A short film by Adan Jodorowsky (Alejandor's son and star of Santa Sangre)
• Mr Bongo Trailer
Buy the DVD from Amazon.co.uk
Buy the Blu-Ray from Amazon.co.uk
Posted by Dark Angel at 19:09