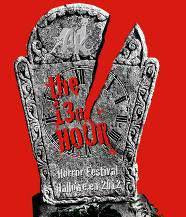 The 13th Hour Horror Festival is currently in full swing at London's Leicester Square Theatre. The event is running right the way through the Halloween season up until November 4th.

Highlights include a special simultaneous screening of Alfred Hitchcocks 1960 shocker "Psycho" alongside Gus Van Sant's 1998 remake on Thursday the 25th. A weekend of zombie films, including "Dawn of the Dead" on Friday the 26th, "28 Days later" on Sunday the 28th and "Dead Snow" on Monday the 29th.
There will also be a number of stage plays including "Dracula" and such delights as "The Ghoul I Love", "The Halloween Sessions" and "Play Dead", as well as various comedy events and lectures.
For more info on whats on and when, and to book tickets, visit the Leicester Square Theatre website.