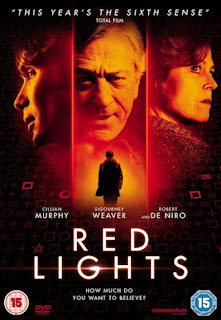 RED LIGHTS is being released on UK Blu-ray, DVD and to download on 22 October 2012 from Momentum Pictures.

Two sceptical scientists seek to expose the trickery behind seemingly unexplainable events but face their greatest challenge to their beliefs and their lives when an enigmatic psychic resurfaces.
Tenacious Dr. Margaret Matheson (Sigourney Weaver), a world renowned investigator of paranormal hoaxes together with her partner Tom Buckley (Cillian Murphy) study the most varied metaphysical and psychic phenomena with one aim, to prove their fraudulent origin.
But when legendary but elusive blind psychic Simon Silver (Robert DeNiro) emerges following a mysterious 30 year absence, the once-fearless Matheson warns her Buckley to leave this case alone for fear that Silver will retaliate and put his life in danger.
Empowered by his obsession to disprove Silver, Buckley enlists the help of his star student Sally Owen (Elizabeth Olsen) and uses every tool at his disposal. As Tom gets closer to Silver, whose magnetism becomes stronger with each new manifestation of inexplicable events, tension mounts, and he is forced to question his own core beliefs.
RED LIGHTS features an all star cast Academy Award winner Robert De Niro, Sigourney Weaver, Cillian Murphy, Toby Jones, Joely Richardson  and rising star Elizabeth Olsen.
Extras on the discs include a "Making-Of" special.
Buy the UK DVD from Amazon.co.uk

Buy the UK Blu-Ray from Amazon.co.uk
Posted by Dark Angel at 12:04